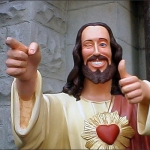 I often have a hard time keeping my own secular views separate from the views of people I interact with on a professional level. It is definitely something I work on, as often as I can consciously be aware of. Secular may even be too strong of a word, as I have a belief system myself. I just tend to find it does not align with the greater population’s. When one works among non-faith based organizations it is often ethically difficult for me to see how they bleed into faith based practices and not to intervene.

I understand the resilience piece of “religion.” It is very important to some people’s recovery and personal growth, their entire identity may be based in it. It’s also a definitive pro-social activity for most. It is a sense of community. Churches offer many things to many people. But to have it be the only option in some circles is frustrating.

I really find religion to be exactly as described by Marx and others. An opiate of a society. I am not an atheist. Truth be told, I believe in energy and the human need to name it. That is all. And aliens; sweet ancient baby alien space monkeys, named Jebus….

Perhaps it is because of my own relationship or lack there of with organized religion that causes this disconnect. Guilt was the only religious icon my family of origin worshiped, and even that was in secret.  I have read into many religions and feel comfortable with my base knowledge of most. I feel that I am open minded and liberal about most things, but I have a real hang up about religion. Why is that?

I find myself judging most religions for being judgmental. I find myself wanting to offer alternatives to people that don’t want to do anything but church related activities…How do you temper that? I frustrate myself.

Cliché or not, spirituality I find inspiring, religion I find oppressive. Oy.

One thing I have realized over the years is that I find more patriarchal religions to be the most aggravating to me…perhaps it is my inner feminist that spurs my disdain. The thought is ever evolving….

Like Loading...
© 2011-2020 Unauthorized use and/or duplication of this material without express and written permission from this blog’s author and/or owner is strictly prohibited. Excerpts and links may be used, provided that full and clear credit is given to this blog with appropriate and specific direction to the original content.